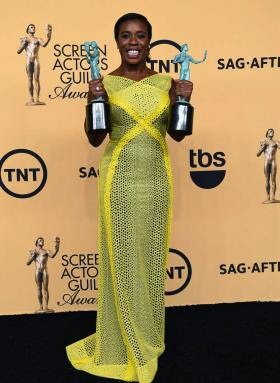 Congratulation to Hollywood actress Uzo Aduba for winning awards in roles played in 'Orange is the New Black'. The actress with Nigerian roots won awards in Los Angeles on Sunday at the Screen Actors Guild awards as Best Actress in a comedy series. She also won 'Outstanding Performance by an Ensemble in a Comedy Series'
Uzo who looked beautiful in a striking yellow Angel Sanchez Spring 2015 gown expressed her gratitude saying "I want to say a huge massive thanks to our cast, without whom this is not possible. I love you guys so desperately, so much. This is not done without you, any step of the way."
This is the first SAG award the beautiful actress would be clinching.

Many congrats to her Nwannem!
Posted by Duchess at 12:50