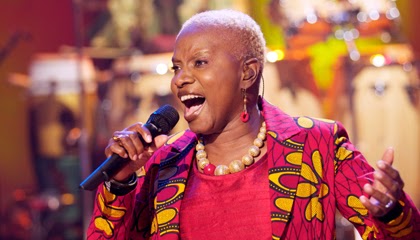 Grammy award winner singer-songwriter Angelique Kidjo will on the Saturday 17th of January grace the city of Glasgow to sing with the Royal Scottish National Orchestra for the Celtic Connection Festival. The festival is the largest yearly winter music performances of its kind and the UK's premier celebration of Celtic music. The Beninese singer who is noted for her diverse musical influences told of her excitement in her response "Me, standing there in front of an orchestra? I never would have believed such a thing could happen. But what a great answer it is to those people back home who called me a prostitute for singing."

Kidjo who joined her mother's theatre troupe as a young singer and dancer got the Celtic Connections opportunity in 2011 at the Montreux Jazz Festival. She agreed when Gast Waltzing, a composer and conductor with the Philharmonic Orchestra of Luxembourg who liked her singing suggested he could have her perform with an orchestra. The musical diva who is fluent in Yoruba, French, Fon and English and also sings in all the languages said "I'd always wanted to sing with an orchestra, since my father played me those records all those years ago, but I didn't dare dream that it could happen, and I couldn't imagine my music being performed like this. My first thought was, 'I don't want this to sound ridiculous', but this guy was serious." The event takes place in the Main Auditorium of Glasgow Royal Concert Hall. Glasgow Scotland.

What a great move by the African premier diva. This reminds me of the nice saying "When opportunity meets with preparedness"
Posted by Duchess at 18:25