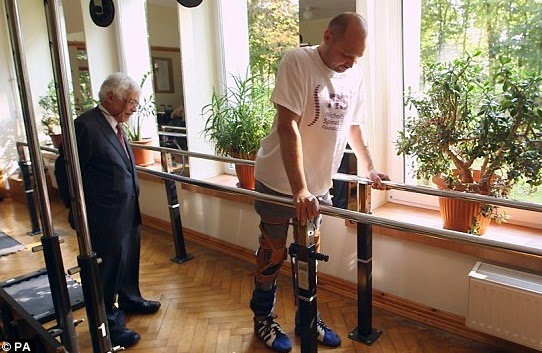 You would have thought I am about feeding you miracle story from one religious event, as it is common with headlines like this, nope. What you are about to read is the efforts of many years of research by experts.

Doctors in Poland with collaboration with colleagues in the United Kingdom have been able to get a paralysed man up on his feet again. This was made possible with a process of transplanting cells from the nasal cavity to the spinal chord. The treatment involves cells taken from sense of smell and then transplanted into the spinal chord after a particular time scale. The 40-year-old Bulgarian man who was used for the test became paralysed after an attack on his spine in 2010.

The Chair of the Neural Regeneration at the University College London Institute of Neurology, Prof. Geoff Raisman who led the London team in a statement, confirms that what has been achieved is "more impressive than man walking on the moon".

This is another ray of hope in medicine again... I hope very soon we will have such announcements for HIV/AIDS, Cancer, Ebola and all other deadly diseases.
Posted by Duchess at 21:37