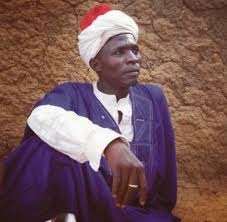 Nigerian/Kannywood actor and comedian Rabilu Musa popularly known as Dan-Ibro has passed on. Dan-Ibro died early hours of Wednesday after a long battle with kidney disease and has been buried according to Islamic injunction.

Dan-Ibro was one of the foremost Hausa entertainers who stood the test of time, when the film industry was evolving in northern part of Nigeria. He registered his marks when he featured alongside some Nollywood actors in films, bridging gaps between actors from different parts of the country. Dan-Ibro 44 years-old, is believed to have acted in many movies than any Kannywood actor. He would be fondly remembered for his acts, which were mostly spot on with humour and pun intended.

May his soul rest in peace, I pray for his family to have the fortitude to bear this huge loss.  I pray the acting industry would be able to continue the good work from where he stopped.

He'll be greatly missed.
Posted by Duchess at 19:55