'The Dress' that caused rows 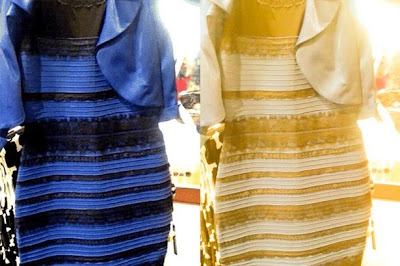 Remember recently the social media was in frenzy over the colour of a particular dress with over 10m tweets on it within a week? Closed ones too for once had opposite views on this apparel with no unified answer.
American researchers at Massachusetts Institute of Technology and Wellesley College have attempted putting the differences to rest by asking 1400 people of which 300 had no clue of the picture, questions on the dress.
Outcome reveals 57% believed the dress had blue and black stripes, 30% felt it's white and gold, 10% said its blue and brown.
The researcher speculates that differences in position on the dress is about artificial and natural lightings and about experiences of people to lighting whether they stay awake during night or daylight hours.
My take after this research is that no one is wrong on this dress. It also confirms we all see life in different perspective. End of discussion!
Posted by Duchess at 16:42