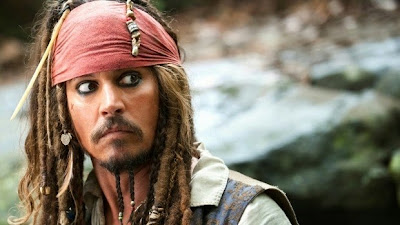 The Department of Agriculture in Australia has asked Hollywood actor Johnny Depp also known as 'Jack Sparrow' in Pirate of the Caribbean to remove his dogs from the country or have them put down.This is coming as a result for failing to declare them on entering into the country in his private jet a month ago for the shooting of Pirates of the Caribbean.

The country's agriculture minister said: " He has decided to bring to our nation two dogs without actually getting proper certification and the proper permits required.  Mr Depp has to either take his dogs back to California or we are going to euthanise them. He's now got about 50 hours left to remove the dogs."

Similarly,the country's immigration minister said: "The (dogs) should be screened like everyone else".
Australia have strict quarantine rules.You may need to watch 'Nothing to Declare' to have a feel of Australia on things of this nature.
Posted by Duchess at 23:31