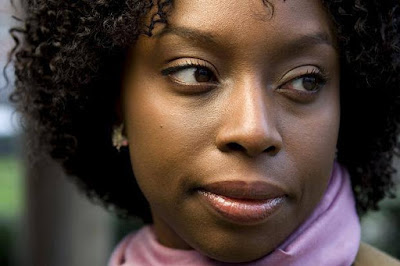 What thrills me most about art is the "power of the narratives". It gives you the ability to bring your own words in the way you see life which to me is an art...Our expressions, experiences and understandings are different and I take any close opportunity to read people's narratives, not only to know about any occurrence or how events took place but to appreciate how these narration was garnered or woven together.
A few weeks back, news broke out about the kidnapping of Chimamanda Adichie's father. Here is her narrative from New York Times revealing all you need to read about it. I'm glad her father came out of this harrowing experience alive.

"MY father was kidnapped in Nigeria on a Saturday morning in early May. My brother called to tell me, and suddenly there was not enough breathable air in the world. My father is 83 years old. A small, calm, contented man, with a quietly mischievous humor and a luminous faith in God, his beautiful dark skin unlined, his hair in sparse silvery tufts, his life shaped by that stoic, dignified responsibility of being an Igbo first son.


He got his doctoral degree at Berkeley in the 1960s, on a scholarship from the United States Agency for International Development; became Nigeria’s first professor of statistics; raised six children and many relatives; and taught at the University of Nigeria for 50 years. Now he makes fun of himself, at how slowly he climbs the stairs, how he forgets his cellphone. He talks often of his childhood, endearing and rambling stories, his words tender with wisdom.


Sometimes I record his Igbo proverbs, his turns of phrase. A disciplined diabetic, he takes daily walks and is to be found, after each meal, meticulously recording his carbohydrate grams in a notebook. He spends hours bent over Sudoku. He swallows a handful of pills everyday. His is a generation at dusk.

On the morning he was kidnapped, he had a bag of okpa, apples and bottled water that my mother had packed for him. He was in the back seat of his car, his driver at the wheel, on a lonely stretch between Nsukka, the university town where he lives, and Abba, our ancestral hometown. He was going to attend a traditional meeting of men from his age group. A two-hour drive. My mother was planning their late lunch upon his return: pounded yam and a fresh soup. They always called each other when either traveled alone. This time, he didn’t call. She called him and his phone was switched off. They never switched off their phones. Hour after hour, she called and it remained off. Later, her phone rang, and although it was my father’s number calling, a stranger said, “We have your husband.”

Kidnappings are not uncommon in southeastern Nigeria and, unlike similar incidents in the Niger Delta, where foreigners are targeted, here it is wealthy or prominent local residents. Still, the number of abductions has declined in the past few years, which perhaps is why my reaction, in the aftermath of my shock, was surprise.

My close-knit family banded together more tightly and held vigil by our phones. The kidnappers said they would call back, but they did not. We waited. The desire to urge time forward numbed and ate my soul. My mother took her phone with her everywhere, and she heard it ringing when it wasn’t. The waiting was unbearable. I imagined my father in a diabetic coma. I imagined his octogenarian heart collapsing.

“How can they do this violence to a man who would not kill an ant?” my mother lamented. My sister said, “Daddy will be fine because he is a righteous man.” Ordinarily, I would never use “righteous” in a non-pejorative way. But something shifted in my perception of language. The veneer of irony fell away. It felt true. Later, I repeated it to myself. My father would be fine because he was a “righteous man.”

I understood then the hush that surrounds kidnappings in Nigeria, why families often said little even after it was over. We felt paranoid. We did not know if going public would jeopardize my father’s life, if the neighbors were complicit, if another member of the family might be kidnapped as well.

“Is my husband alive?” my mother asked, when the kidnappers finally called back, and her voice broke. “Shut up!” the male voice said. My mother called him “my son.” Sometimes, she said “sir.” Anything not to antagonize him while she begged and pleaded, about my father being ill, about the ransom being too high. How do you bargain for the life of your husband? How do you speak of your life partner in the deadened tone of a business transaction?

“If you don’t give us what we want, you will never see his dead body,” the voice said.

My paternal grandfather died in a refugee camp during the Nigeria-Biafra war and his anonymous death, his unknown grave, has haunted my father’s life. Those words — “You will never see his dead body” — shook us all.

Kidnapping’s ugly psychological melodrama works because it trades on the most precious of human emotions: love. They put my father on the phone, and his voice was a low shadow of itself. “Give them what they want,” he said. “I will not survive if I stay here longer.” My stoic father. It had been three days but it felt like weeks.

Friends called to ask for bank-account details so they could donate toward the ransom. It felt surreal. Did it ever feel real to anybody in such a situation, I wondered? The scramble to raise the money in one day. The menacingly heavy bag of cash. My brother dropping it off, through a circuitous route, in a wooded area.

Late that night, my father was taken to a clearing and set free.

While his blood sugar and pressure were checked, my father kept reassuring us that he was fine, thanking us over and over for doing all we could. This is what he knows how to be — the protector, the father — and he slipped into his role almost as a defense. But there were cracks in his spirit. A drag in his gait. A bruise on his back.

“They asked me to climb into the boot of their car,” he said. “I was going to do so, but one of them picked me up and threw me inside. Threw. The boot was full of things and I hit my head on something. They drove fast. The road was very bumpy.”

I imagined this grace-filled man crumpled inside the rear of a rusty car. My rage overwhelmed my relief — that he suffered such an indignity to his body and mind.
And yet he engaged them in conversation. “I tried to reach their human side,” he said. “I told them I was worried about my wife.”

The next day, my parents were on a flight to the United States, away from the tainted blur that Nigeria had become.

With my father’s release, we all cried, as though it was over. But one thing had ended and another begun. I constantly straddled panic; I was sleepless, unfocused, jumpy, fearful that something else had gone wrong. And there was my own sad guilt: He was targeted because of me. “Ask your daughter the writer to bring the money,” the kidnappers told him, because to appear in newspapers in Nigeria, to be known, is to be assumed wealthy. The image of my father shut away in the rough darkness of a car boot haunted me. Who had done this? I needed to know.

But ours was a dance of disappointment with the authorities. We had reported the kidnapping immediately, and the first shock soon followed: State security officials asked us to pay for anti-kidnap tracking equipment, a large amount, enough to rent a two-bedroom flat in Lagos for a year. This, despite my being privileged enough to get personal reassurances from officials at the highest levels.

How, I wondered, did other families in similar situations cope? Federal authorities told us they needed authorization from the capital, Abuja, which was our responsibility to get. We made endless phone calls, helpless and frustrated. It was as though with my father’s ransomed release, the crime itself had disappeared. To encounter that underbelly, to discover the hollowness beneath government proclamations of security, was jarring.

Now my father smiles and jokes, even of the kidnapping. But he jerks awake from his naps at the sound of a blender or a lawn mower, his eyes darting about. He recounts, in the middle of a meal, apropos of nothing, a detail about the mosquito-filled room where he was kept or the rough feel of the blindfold around his eyes. My greatest sadness is that he will never forget."

Culled from -New York Times
Posted by Duchess at 14:44