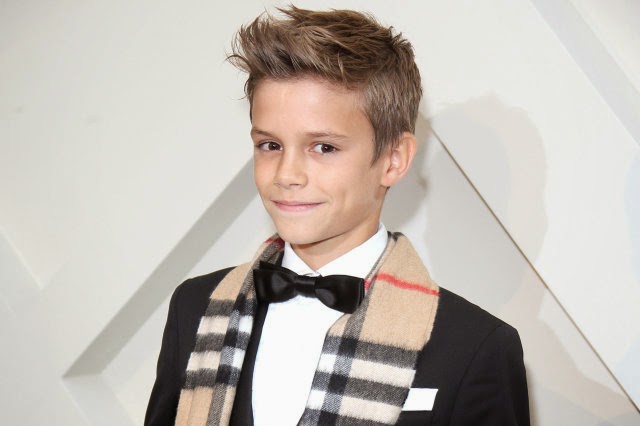 David Beckham's second son Romeo have carted away a whooping sum of £45,000 for modelling the top notch British label design raincoat and scarf. The 12-year-old lad starred as the cupid to a 'madly in love' couple in the Burberry Christmas advert campaign.

For a day's work, Romeo earned the huge sum of money, bringing his earnings into comparison to the highest earning models around the world, which if worked out, would have a breakdown of £93.75 per minute.

Burberry's Chief Creative Officer, Christopher Bailey in his words said "It continues to be an utter joy working with Romeo – he has charm, style and great energy! I'm delighted that he's the lead role in our festive campaign."

What more can I say to David and Victoria Beckham? I'm sure they are beaming with smiles, strolling to the bank once again. Things I hear Africans say... "A lion will always give birth to a lion and nothing else."
Posted by Duchess at 17:04