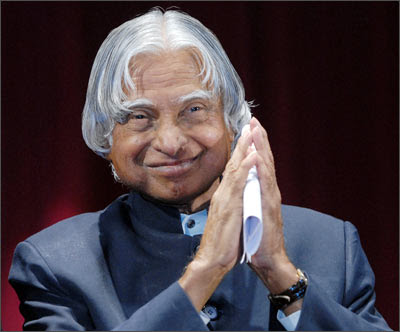 Former President of India Dr APJ Abdul Kalam, has died today Monday 27th 2015 after suffering a cardiac arrest at a lecture he was delivering at an Indian Institute of Management Shilong, India.

Kalam is considered to be the brain behind India's Space Launch Vehicle(SLV) and missile programmes. In some of his numerous quotes, he was noted to have said;

"I appeal to political leaders, religious leaders, opinion makers, media personnel and all Indian citizens to place a moratorium on all issues which are impediments to the development for the nation from now and pledge ourselves to make the missions of developed India a reality. This will be the greatest legacy that we can proudly leave behind for our next generation. Let us sacrifice our today so that our children can have a better tomorrow.”

This India's illustrious son will be greatly missed. Our condolences to all the good people of India.
Posted by Duchess at 18:15