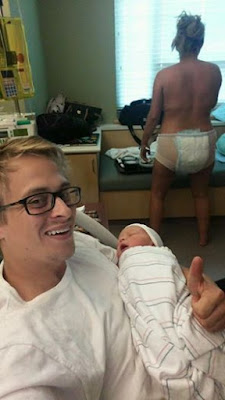 After the joys that comes with birthing a baby, other realities like changes in the woman's body seldomly gets talked about. Amanda Bacon, a new mum from North Carolina, USA, braved the effort to highlight this via social media by sharing her picture, noting the realities that lies with post birth.

Asides her partner and baby in the picture, Amanda also appeared in the background wearing her jumbo sized sanitary towel, a true picture of the state of bleeding many mothers go through during postnatal.

In a post she titled 'Motherhood uncensored', Amanda wrote:


"I'm sharing this picture because it's real. This is motherhood; it's raw, stunning, messy, and freaking hilarious all rolled into one.
"Having a baby is a beautiful experience, and the realities of postpartum life aren't spoken enough about. And definitely not photographed enough. Some people probably find this uncomfortable, but why?
"I seriously don't get it! It's probably because this part isn't talked about. We all should try and educate, empower and embrace every aspect of childbirth, including moments like this.
"And do it while having a sense of humor. Nothing says welcome to motherhood like an adorable squishy baby, and a giant mom diaper. 😜
"Edit: My husband didn't post this. He doesn't even have Facebook. I did."