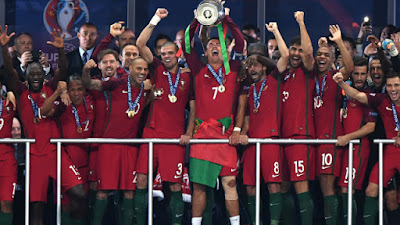 As expected that home advantage should afford France an edge, Euro finals 2016 came to a close yesterday with Portugal clinching the winnings with a (1-0)score match with France. Though Cristiano Ronaldo's knee injury was also meant to be a set back but the team still got to rejoice on their victory.

In an interview Ronaldo said "Today I had bad luck because I had a small injury in the beginning of the teams, but my colleagues did their part- they run, they fight ... nobody believed in Portugal but we won,".
Congratulations guys!!
Posted by Duchess at 02:01